Routes for Free Climbing on the Island of Elba

We are going to visit the climbing walls of the island, and maybe, between one and the other, we can take a plunge. The beautiful inlets in between the rocks are ideal places for a moment of relax, the waves of the sea are soft and delicate massages, and create magical games of colours and lights.

The West versant of the island: 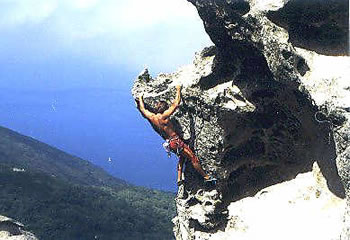 Madonna del Monte
Leaving from Portoferraio, one of the chief town of the island, we follow the direction of Marciana, where we will get to the Madonna del Monte through a path that starts from the Fortezza Pisana; the walk takes about 25 minutes. On the path there are small chapels that symbolize the stop of the Via Crucis. The path ends with a short staircase. Looking to the right just before arriving at the top of the staircase, you will be able to see granite rocks that have the shape of an eagle, so called the ‘Aquila’. Going passed the sanctuary of the Madonna del Monte and following the path on the right we get to the first climbing wall. Looking at the rocks of granite eroded by water and wind, we are brought to imagine fantastic figures. Climbing up we grasp at the holes that creates big rock hives. Here you can climb all year round, even during the summer, thanks to the shade and to the handy ‘Teatro della Fontana’ (1698) situated behind the sanctuary, from where you can drink fresh spring water. The gradation goes from IV to 6b, and the pegs have been put by alpine guides in the spring of 1997.

Sant'Andrea
Going ahead we arrive to Sant’Andrea, known as the ‘island on the island’. From the beach we take the path that takes us to the ‘wale’s rock’ that looks toward the inlet formed by two parallel walls, one of which is slightly out of the perpendicular. At the moment there aren’t many pegs, but soon there should be added more. The rocks is granite, and unfortunately on the projection there is often a layer of sand that makes it difficult to adhere. The gradation goes from 6b and 7b+. Going back to Fetovaia we discover the magical beauty of the western coast of the island, with wonderful inlets and beaches with clear sand. From this part of the island you can see the island of Pianosa and in the clearest days Corsica can be seen.

Monte San Bartolomeo and Fetovaia
Arrived to the town of Chiessi, we can immediately notice the mount of San Bartolomeo, that can be reached in about 40 minute walk. Here as well the climbing tracks have been equipped by the same alpine guides that have worked on the one of Madonna del Monte: Giorgio Peretti from Cortina and Aldo Leviti from Predazzo, with the help of Fabrizio Galeazzi, from Elba. On this wall of rock, situated about 500 meters from the sea level, there’s also a small climbing wall with an iron rope party, that starts next to the remains of a medieval church. In this area there is granite rock as it is made of the climbing wall in Fetovaia situated a few kilometres from Chiessi. Here there are several climbing paths that go from V to 7b+ gradient, again on a surface slightly out of the perpendicular, with technical passages where the wonderful granite allows you to climb helping yourself with the soft and small notches.
The climbing paths are not that long but you cannot get bored with this landscape. During the summer this is also a renowned sunbathing site for nudists, who sometimes enjoy climbing as well! The wall is exposed southward, and during the winter when there isn’t strong wind, the sun is warm enough to allow to climb wearing just a t-shirt in all tranquillity from the morning to the sunset. Here the climbing ways are equipped with tap-roots, the granite is yellowish, but very solid. You can reach the ways from the top and with a short path you can get to the bottom. As soon as this climbing wall was discovered there were chains, but now, after a few of them were stolen, you can let yourself down with your own cordage to be recuperated once arrived at the bottom.
From the parking site the ways can be reached in 2/3 minute walk.