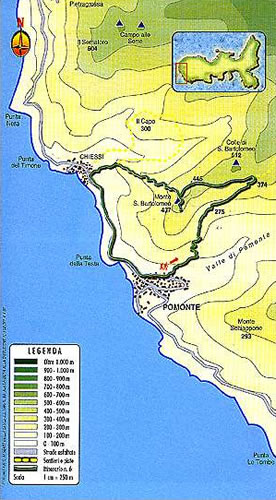 We start from Marciana, on the low part near the sixteenth-century door near the principal Church. Route is traced with n° 3 and it crosses the town to the high part on stairs. In the highest part of the town there are two interesting structures: the Archeological Museum (containing Etruscan and Roman rests) and Pisa's Fortress that are placed along the route leading to Madonna del Monte. Outside the town, the route towards Madonna del Monte's Sanctuary is wide, a few climbing, paved and step-made, bordered by Via Crucis' stops placed in characteristic Chapels.

The place is rich of historical references: Napoleon Bonaparte himself stopped here in August of 1814, and secretly he met here Maria Walewska and her son Alexander. Maybe the panoramic position of the area regard to Corsica, his native place, was an inspiration for the project of his successive escape and of the attempts to take again the power. The Sanctuary is famous for its waters' freshness and goodness and recently for the recovery of a fresco awarded to Sodoma in one of its internal walls.

The surrounding area is rich of archeological evidences, that go back to prehistory, when the area was inhabited by Ligurian- Appenninic populations given to sheep-rearing.

If you want to visit this caves and any other kind of shelter, dolmens and goatfolds too, you have to go on north, for about a hundred meters beyond the Sanctuary, and you must reach the rocky assembly called "The Eagle".

Another interesting area for its goatfolds and shelters is the one called Serraventosa, 1 km. distant, towards west.

Interesting too is Monte Giove's crest, achievable from Serraventosa through a path. Monte Giove (855 m.) is one of the most significant panoramic places of the island. The area is also known for its strange-shaped rocks, sunken by atmospheric agents, showing monsters with human and animal shapes.

From Monte Giove we descend towards the sanctuary and from here, with path n° 3 on descent for 700 m., and then with path n° 13 we reach the principal road on La Zanca.