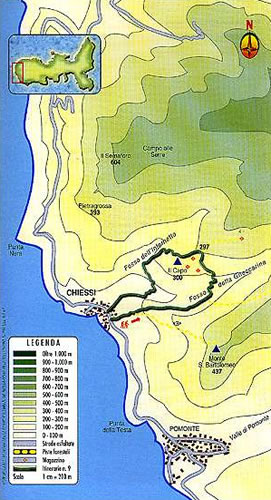 Start your walk by taking the lane from the parish church of Chiessi. From here, steps take you upwards among the village houses. In a few minutes you will see the first cultivated plots of land in the valley.

Along the first part of the walk, follow the signs for C.A.I trail N°. 3 heading east, north-east. Beyond the last houses in this rural village, the trail becomes much more striking. To the right (looking south) stands the majestic peak of San Bartolomeo; to the left (looking north) lies the peak of Campo alle Serre, dominated by the pylon which marks out the signal station here.

At the fork, leave trail N°. 3 (which climbs up the peak of San Bartolomeo) and take the trail which leads east into the heart of the valley. This path runs parallel to the stream on the valley floor. The landscape here is marked out by still visible terraces, some of which are planted with orchards and vineyards. In the distance lies the Cape (il Capo), a huge protuberance which seems to rise out of nowhere in the middle of the valley.

The abandoned plots of agricultural land are home to a multitude of floral species: from wild, grassy vegetation and the many-coloured blooms of orchids, to shrubby steppes carpeted with inula (Inula viscosa) and topped lavender (Lavandula stoechas), and the more complex garrigue environment, where rockrose (Cistus monspeliensis), tree heath (Erica arborea) and bloom flourish. The dry-stone walls which line the terraces have been taken over by rarer varieties of plant. In addition to the ubiquitous mosses and lichens, the walls play host to unusually shaped navelwort plants (Cotyledon umbilicus veneris). In spring the plants are easily recognisable for their characteristic corn-on-the-cob shaped flowers and leaves with a depression in their centre.

The bridle path takes you further into the valley for a good twenty minutes. After a fork, it drops suddenly and follows a channel known as the fosso della Gneccarina.

The going is good until you reach the ford across the stream. The path follows the northern bank of the stream for a short distance before it begins to wind its way up the hill of the Cape in a series of steep bends. The vegetation is much more dense than before, with flourishing broom plants and strawberry trees (Arbuttis tinedo) as well as increasing numbers of holm oaks (Quercus ilex).

The abandoned buildings higher up were once used by local people as a base for producing wine. A quick look inside reveals a number of now defunct "tools of the trade", including wine vats and a typical millstone (known locally as a sassileva). This strange block of granite was connected to a type of winch and used to press the grapes. Beyond the first building the path veers to the left (westwards). Follow the path beyond the second building and continue until you reach the top of the Cape.

Once upon a time the Cape was full of life. Evidence can be seen from clearings in the vegetation and the numerous abandoned buildings along the terraces. Now silence reigns. Here and there, a forlorn tree proves how nature strives to reclaim the land which man once took away. You can almost hear the echoes of the ancient workers, the shouts of children at play, the clatter of the donkeys' hooves and the scent of the newly-pressed grapes.

The land is no longer cultivated here. All that remain are dozens of terraces covered with a thick layer of herbs, lavender and Helichrysum, the skilled architecture of the ancient farmers shaping the contours of the peak. After a wide semicircle to the west, you will see a small mound.

Here, two rows of dry-stone walling mark out the ancient bridle path. Follow the path along the plateau for a while; soon afterwards you will need to turn right and follow the wide steps leading downwards. After a few bends the path drops down steeply towards a channel known as the fosso dell'Infernetto.

Follow the channel for a few minutes; the path now makes a wide semicircle to the south, joining up with the valley carved out by the fosso della Gneccarina near an abandoned granite quarry, now filled with rubble. Mastic (Pistacia Lentiscus), petty spurge (Euphorbia peplus), rosemary (Rosmarinus officinalis) and common myrtle (Myrtus communis) abound on this part of the route.

A tarmacked road leads from the quarry through the last remaining cultivated fields in the valley, taking you back to the village in a few minutes.