7 days around the island 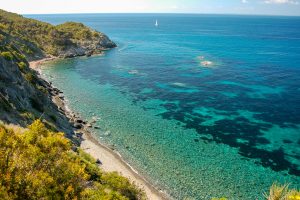 The island of Elba, with its exceptionally varied 147 km of coast, with caves and beautiful small gulfs, it is the ideal holiday destination for the lovers of sea kayak. Paddling along the coasts of the island, we will be able to reach places that are otherwise very difficult to reach. Taking advantage of the easiness to handle the kayak and thanks to its low bottom, in the silence of the navigation, we will be able to get a close look to sea-gulls, cormorant and although only rarely, to closely observe tuna fish and whales.

To take part in the excursion is not necessary to be athletes, but it is essential to have group spirit and to have a good sense of adaptation, to have respect of nature and to love the sea.

The departure point is the beach of Marina di Campo. We leave in the morning and we take a south-west direction towards the gulf of Galenzana, and as soon as we double ‘Punta Bardella’, we coast the ‘Grotta del Bue Marino’. We keep paddling towards west soon reaching the ‘Grotta del Vescovo’ that can be entirely visited on board of our kayaks.

Once visited, we exit the cave and after a few hundreds of metres the rocky coast turns itself into a series of small beaches where we cannot but stop to take a plunge. We carry on and get to a stretch of coast characterized by white granite, and where we find the ‘Grotta Azzurra’, one of the biggest caves of the island. With our kayaks we can easily avoid the emerging rocks and admire the clear water and the extraordinary games of light on the white walls of the cave.

Going further we reach the gulf of Cavoli, and after that the beach of Seccheto and the beach of Fetovaia, after which we see a long series of dark beaches from where we can easily see the island of Pianosa and the one of Montecristo.

After spending the hottest hours of the day at the beach of Le Tombe, we start paddling again towards the scoglio dell’Ogliera, where at only few meters under the sea level lays the wreck of a ship, that you can easily admire just looking through the waves from our kayaks. Further west we arrive at the village of Pomonte, an ancient village built where once there was a Roman harbour.

Behind it we can admire the Monte Capanne, the highest mountain of the island (1019 m) and the ‘Valle del Poio’, that with his vineyards, is in contrast with the grey granite walls. At this point we are on the west side of the island, and we can delineate Corsica with its high mountains at the horizon. White cliffs spread up to the village of Chiessi.

We get to ‘Punta Nera’ (the most western point of the island); doubling it the granite walls leave space to friable and more tender stratified rocks. Paddling for about another hour we get to the white lighthouse in Patresi where we end our first part of the journey. On the second day we leave from Patresi in the morning from where we soon reach Capo Sant’Andrea, a white promontory that in the past has been an important landmark for the sailors.

We stop on the small beach to have some breakfast and to get some food for the day. Once refreshed and ready, we start again on our journey around the island. We are now getting to the north side of the island, and we can immediately notice that in comparison to the previous day the vegetation is completely different. The coast is covered by luxuriant vegetation. In the distance on our left we can clearly see the island of Capraia and in front of us the north side of the island that at the horizon seems to be linked to the Tuscany coast. We are now paddling in an area where it is quite easy to sight whales. These mammals often come alongside and it is exciting to be able to admire these wonderful animals slowly and elegantly swimming a few hundreds meters from the coast, signalling their presence with a few sprays.

After leaving behind the imposing ‘scogliera del Nasuto’, we start seeing the Towre of Marciana Marina, built in the XVII century. Passing in front of the town of Marciana Marina, we are taken over by the beautiful sight of the Monte Capanne, luxuriant with its dark green vegetation, and with the two medieval villages of Poggio (339 above sea level) and Marciana (350 above the sea level).

Passed the ‘Punta della Crocetta’ the coast starts becoming softer and greener. We reach the ‘Scoglio della Paolina’, and going forward we see on our right the beach of Procchio and we soon reach the ‘Porticciolo’, a small shady inlet ideal for our afternoon stop. The shadows of the trees that reach the sea tell us that it is time to go back in our kayaks and doubling ‘Punta Penisola’, we get to Enfola.

We keep paddling and we arrive to the ‘Grotta dello Sbruffo’, whose narrow and low opening is difficult to identify, but that leads us to a very suggestive space. After leaving the cave, and passed the Capo dell’Enfola, we coast an indented cliff, where sea birds usually take refuge. We arrive to the zone of the island with white beaches, from where we can already see the imposing fortresses of Portoferraio; after a short while we get to the beach of the Ghiaie, where our second day ends.

On the morning of the third day, after an energetic breakfast we take for the sea, coasting the Medicean bastions, up to the lighthouse of Forte Stella, from where we cross the channel of Portoferraio going towards ‘Punta Falconaia’. Heading towards north-west the rocky coast opens up into the two bays of Nisporto and Nisportino, and continuing ahead we reach the deep red rocks below Monte Grosso. We get to ‘Capo Vita’, reaching the ‘Capo’, the closest part of the island to the coast of Italy. Leaving to our left the ‘Isola dei Topi’ (Mice islet), we enter in the heart of the mining part of the island, the red mountains on our left show the wounds inferred by man during the long period of extraction that was stopped at the beginning of the eighties, when the mines were closed down.

Near the ‘Punta delle Paffe’ we land on a suggestive beach of hematite (iron) on which we can roll in after we took a swim transforming ourselves into black sparkling men. Going along the coast we reach Rio Marina, where we stop to take in stores. We start again paddling; the dark rocks covered with plants of agave and of bushes of prickly pears, dominate the zone that we have to pass before getting to the beach of Ortano, our last landing in this third day.

The day before the last one starts with a spectacular crossing above the shallow soundings between the coast and the small island of Ortano. We pass the beach of Barbarossa and we start seeing the majestic fortress of S. Giacomo (1603) that dominates above the town of Porto Azzurro. After the Forte Focado, we reach a series of small beaches, an irresistible scenery for our first relaxing stop.

Passed the small island of the ‘Liscioli’, the rocky coast follows up to the beach of the Ginepro with a marvellous black sandy waste; we get to the Ginepro’s mine, where magnetite used to be mined. Left the mine we coast another rocky part, rich of caves, to arrive the to the imposing reefs of Ripalti, where a big colony of Real Sea-gull and where, it is easy to see goats. Doubled the ‘Punta di Vallemorta’, a sunny and welcoming coast welcomes us, with big white beaches that are in contrast with the old buildings of the mines; left ‘Punta Calamita’ we reach the ‘Gemini islets’, and we then land on the welcoming beach of the Innamorata’ (lover’s beach), from where we can see the south coast of the island from where we departed four days ago.

It’s the morning of the last day of our journey. We leave behind the mines’ zone, and following the west coast we get to ‘Punta Calamita’; going ahead a series of small sandy inlets follow up to the ‘Capo Norsi’ behind which the transparent sea of the beautiful beach of the Acquarilli encourages us to make a stop. Once back to the sea, we go towards Capo Stella; this is one of the more picturesque part of the island’s coast, with beautiful colours of the mediterranean vegetation that decorate the many small inlets; it’s here that we get to the ‘Cava dei Gatti’ (Cat’s cave).

Doubling Capo Stella we enter in Lacona’s gulf. Once left behind the long beach, and passed the ‘Punta della Contessa’, we paddle southwards to reach a small pretty beach, hidden between cliffs, that cannot be reached by bigger boats but that is easily reached by kayak. We start again for the last part of our journey, and the vicinity of the end of it, makes growing in us the satisfaction of having nearly completed it, but also the sadness of the near end of this experience of silence and quietness not easy to find in our daily life.

After a little we reach the shallows of the ‘Coralline’, an enormous column of granite that at a few ten meters away from the coast, sinks vertically; we go closer to the coast to look at another gem of the coast of the island: the ‘Buca dell’Acqua’, a small cave where there is a spring of fresh water, where birds come to drink at. Once doubled ‘Capo Fonza’, we reach ‘Cala al Fico’, then we coast ‘Ripa Nera’ and then the beautiful white granite of ‘Punta alle Mete’, after which we see the Marina di Campo’s gulf. Paddling on the left side of the gulf we get to the beach of Fonza, then to the pretty bay of Ischia and after a suggestive passage between the small ‘Portocaccamo islet’, we land on the extended beach of Marina di Campo.

WHAT TO BRING: sun cream, hat, t-shirts, sleeping bag, personal objects, warm trousers for the evenings, plastic shoes, flippers, snorkelling kit, torch. During the 5 days the food and water will be bought at each stop. Everyone is responsible for buying their own.